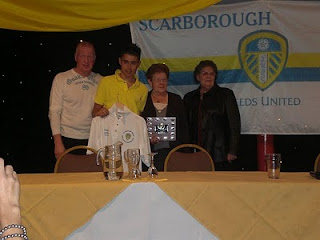 Christmas 2009 saw us lose George Lickes after a long illness. George was a lifelong Leeds United Supporter and held a season ticket in the West Stand right up until his passing and was very much a football man. He played football for the Police Team & Cayton and was also a football coach, training youngsters in Barrowcliff.


George was also a founder member of the Leeds United Member's Club, Scarborough Branch and in order to commemorate both him & his passion for the game The George Lickes' Shield will be awarded at the end of the each season to the Scarborough Whites' Young Supporter of the season.


The inaugural winner of the Shield for the 2009/10 season is Liam Giles who attended every home fixture and only missed four away matches all season. After recieving the award at our 'On The Road' event (pictured above) Liam stated that he is 'happy & proud' to have won the award and hopes to build on his success by attending more matches next season when he hopes to have an away season ticket. 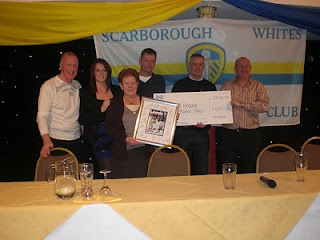 At the start of the season George was featured in the Match Day Programme and was presented with a framed copy of the programme signed by the entire playing squad. George's wife, Anne decided to auction off the programme in order to raise money for the St. Catherine's Hospice, an adult’s hospice that cares for people with life limiting or life threatening conditions and their families and who helped them both significantly through George's illness.


The auction held at our 2010 On The Road evening and was won by Darren Raistrick (pictured above) who purchased the programme for a massive £500.


For more information on the work of St. Catherine's Hospice Please Click Here


Posted by Scarborough Whites at 20:38