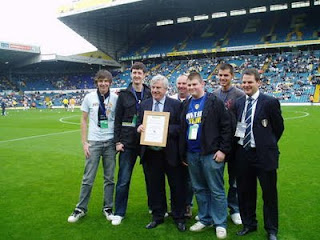 Position Centre back
Born 01 Oct 1960, Birmingham (England)
Clubs: Aston Villa, Shrewsbury Town, Doncaster Rovers, Scarborough, Wigan Athletic.
LUFC Appearances: 57
Goals: 7
Brendan Ormsby was an experienced centre-back, picked up by Billy Bremner towards the end of the 1985-86 season and his solidity at the back did much to help Leeds on their FA Cup and promotion challenge the following year. Neither of those chases succeeded, and both games were to prove painful for Ormsby. In the FA Cup semi-final at Hillsborough, it was his attempt to shepherd the ball out of play that allowed Coventry to score a crucial goal, and in the play-off final against Charlton, he was carried off with a ligament injury that kept him out of the game for two years. He was fairly popular with the fans and very solid at the centre of the defence, but he didn't fit into Wilko's plans and was picked up by Doncaster on his release. Although he continued to play in the lower divisions - and had a brief spell with Waterford in Ireland - he was dogged by persistent injury problems until his retirement from the game in 1995.
We approached Brendan to be our President when we formed in 2006 after he impressed us all at a Lorimer's Bar with his brilliant tales and views regarding his career and his time with Leeds United. Since then he has gone out of his away to make himself available to us and has attended every On the Road event since we began holding them.
You can view our President's most Famous & Infamous moments from his career with LUFC in the clip below:
Posted by Scarborough Whites at 02:39